Today I continue the story of my great-grandpa Leo’s new life in America. At first I was puzzled as to why his sister, Emma (Emmi) Lessiack Keil, with whom he stayed when he arrived in 1912, didn’t accompany him on his travels about the Northeast. Later I realized that she must have just given birth (or was about to give birth) to her daughter, Wally Keil, when Leo arrived in New York. While I haven’t been able to lay hands on an actual birth record for Wally Keil (presumably named after Leo and Emma’s sister, Wally Lessiack), clues suggest that she was born in New York in either October or November of 1912.

Some manifests that I found on Ancestry.com suggest that Emma and Baby Wally took a trip back to Hamburg when Wally was less than a year old. What fun Emma must have had showing off her new baby girl to relatives back in Germany.

Emma and Wally boarded Hamburg-Amerika Linie’s Graf Waldersee in Hamburg on October 4, 1913. Wally is listed as 11 months old, and Emma as “Frau Geo” (which was probably a typo for “Frau Bruno”), age 26.

Here you can see Anton Lessiack listed as Emma’s father, and both Emma and Wally’s last permanent residence listed as New York, USA.

Based on the few annotations available, I think that the next few images of Wally Keil’s adorable babyhood were taken in April of 1914. Emma and Wally seem to be wearing the same outfit in all the photos, so I presume that they were taken on the same day.

Here’s one of newly-uncled Leo, baby Wally, and Emmi on a beach. Could that be Bruno’s shadow in the foreground, taking the picture?

Here are Emma and Wally in “Central Park, New York, 1914,” according to the back of the photo.

Here, on the same steps, are proud Papa Bruno and Wally.

The next two images of Emmi and Wally were both labeled “Central Park, New York, April 1914.” I believe that the dog is the same “Bosco” pictured here, so perhaps this day was an outing with the Maier family? 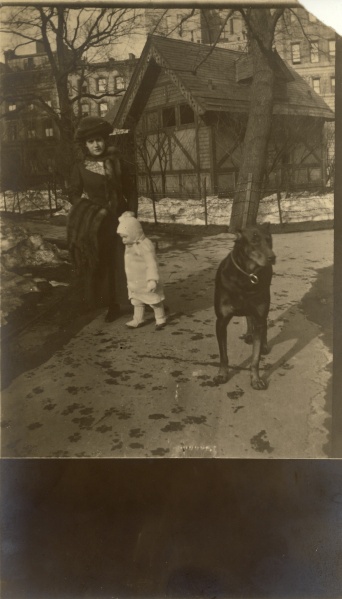 Looks pretty chilly for April, doesn’t it? The trees are bare of any foliage, and Wally is bundled up like a little German-American sausage.

The next image is labeled “1914 Eagle Rock, East Orange, NJ,” and I think that the images that follow were probably taken together. Here are Emma, Wally, Bruno, and an unknown woman doing a little light bouldering. 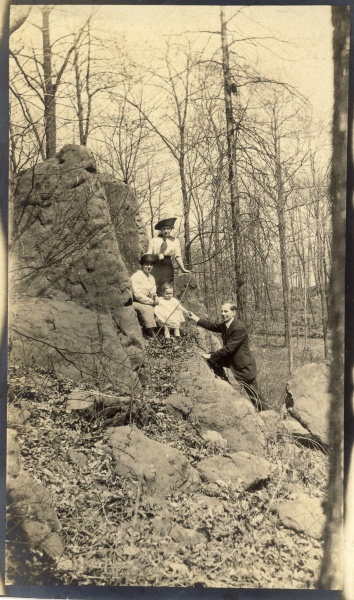 Given that the unknown woman in the foreground seems to be mopping her brow, I gather that the weather was a little warmer for this picnic. Emma, Wally, and great-grandpa Leo make up the rest of the party.

Bruno is in the foreground here, on the left.

Here are Leo and Bruno, taken on the same day, I think, based on the clothes and the setting. They look very dapper for a casual family picnic, don’t they?

Next up is a visit to “Westwood, NJ, 1914.” I think that this might be the Maier family, because the two little girls behind and to the left of Wally look like the same kids pictured here. I’m rather curious to know if Bosco the Doberman Pincer belonged to the Maiers or to the Keils, but unfortunately there is no Ancestry.com for dogs. 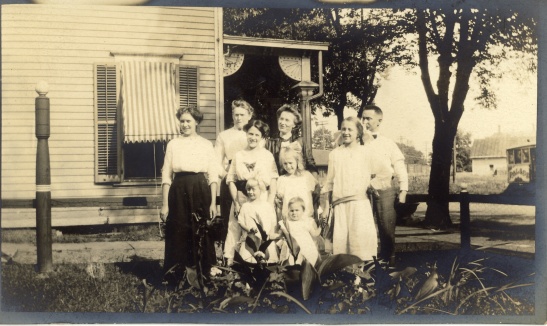 Here is where things get interesting. According to the 1920 Federal Census, Bruno and Emma Keil lived at 67 Queen Anne Road in Bogota, New Jersey, and great-grandpa Leo and great-grandma Margaret Spielmann Lessiack lived right next door at number 69. Another family, the Engelkes, also lived with the Keils at the time. According to the census, Alfred Engelke, his wife Helen, and their daughter Margaret were all from Hamburg, and Alfred was employed as an “Accountant, Shipping Co.” — I have to wonder if that company is Hamburg-Amerika in New York. As we know, Leo worked as a bookkeeper at that establishment.

Here are Emma and Bruno and Wally on the front steps of 67 Queen Anne Road in Bogota, New Jersey, probably around 1914 based on the size of Wally. I believe that the woman with them, in the center, might be Helen Engelke — she appears in several other photos. Is Emma’s jaunty little hat not adorable? She did seem to love a good hat. 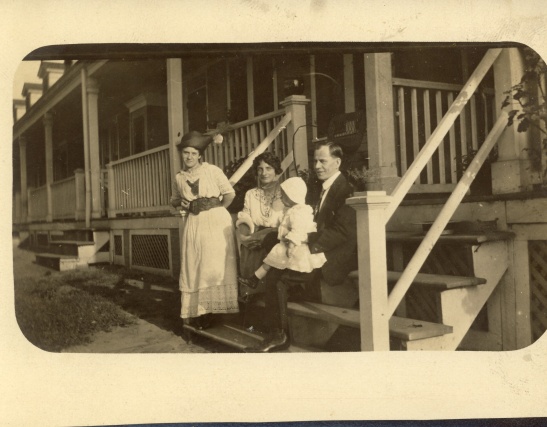 Here’s another shot taken on the same front steps. I don’t know who the woman on the left is — she cannot be Margaret Engelke because she was only 7 years old at the time of the 1920 census, and this photo was probably taken circa 1914. She seems too tall to be a Lessiack relative, so perhaps she was a visiting Keil relative.

This one is labeled, “1914 July, Bogota, NJ” and that appears to again be Bosco next to Wally. I’m going with the theory that Bosco belonged to the Keils, until new data presents itself. 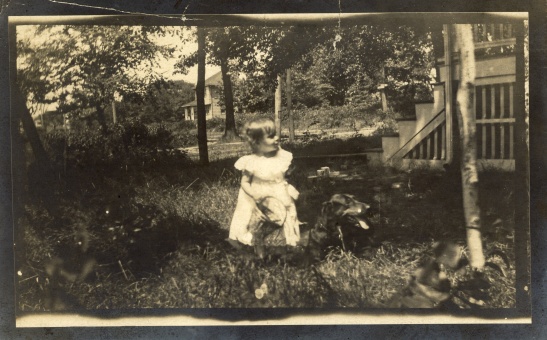 Baby Wally was clearly born into a family prepared to adore and delight in her. Knowing how much great-grandpa Leo loved children (and they him) I can only imagine what a pleasure it was for him to live in such close proximity to his niece. I wonder if he wrote poems for Wally as he later did for me.