Hello, People. Today we continue the Lessiack family travels up and down the California coast in 1927. I covered their Northern California travels last time, ending in the beautiful Muir Woods. Now we will venture south, with a few detours. All of the photographs in this post came from the same beautiful but fragile old black paper album, and my great-grandma Margaret very helpfully provided captions for most of the images. 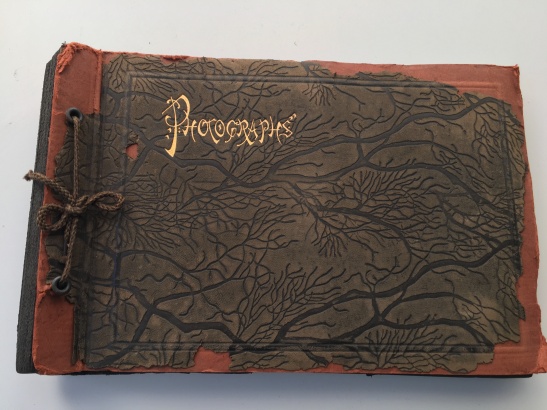 Great-grandma Margaret’s album of the family’s Western adventures. The album begins in Vaughn, New Mexico, and then branches out to both Northern and Southern California, as well as Arizona.

First stop, beautiful Monterey. Now famous for its world-class aquarium and marine science center, it is also known as the setting of John Steinbeck’s 1945 novel Cannery Row. Like so many travelers before and since, the Lessiacks were captivated by the Lone Cypress, which Wikipedia describes thus:

“The Lone Cypress is a Monterey cypress tree in Pebble Beach, CA. Standing on a granite hillside off the 17-Mile Drive, the tree is a Western icon, and has been called one of the most photographed trees in North America…Possibly as old as 250 years, the cypress has been scarred by fire and has been held in place with cables for 65 years.”

The family appears to have stayed at, or maybe only visited, the Hotel Del Monte, a large resort hotel in Monterey. The Hotel Del Monte opened in 1880 and operated as one of the finest luxury hotels in North American through 1942. According to Wikipedia, the building was leased to the Navy during WWII, where it was used as a school for enlisted men training to be electronic technicians. Eventually it became the Naval Postgraduate School of the US Navy, and it is now known as Herrmann Hall and serves as administrative offices and hotel for the school.

The grounds sure were pretty in 1927. 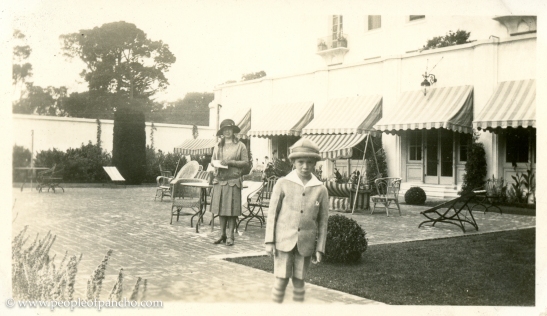 The family then circled back up to the Bay Area for another visit to San Francisco’s Golden Gate Park, and then to catch the S.S. Yale for a journey down the coast.

“Conservatory, Golden Gate Park, 1927.” The conservatory, which is actually a huge greenhouse, still looks almost exactly like this today. It’s a very peaceful place to visit, with its humid indoor temperature and extensive exotic plantings.

The family also visited the Portals of the Past in Golden Gate Park, a memorial to a mansion destroyed in the 1906 earthquake. Atlas Obscura describes it thus:

“The portals began their life at the front entry to the 1891 Nob Hill mansion of railroad tycoon Alban Towne on California Street, which ended up being one of the many structural casualties in the fire and mayhem following the great earthquake. The photographer Arnold Genthe caught an iconic image of the smoldering ruins of San Francisco framed between these columns. Genthe spent the hours and days after the quake walking the streets and taking photos of the devastation. While he documented the damage elsewhere, his own studio was destroyed, taking with it all of his possessions and all of his earlier photography, with the exception of a few negatives he had stored elsewhere.

Later Genthe’s photograph was recreated as a painting for the historic Bohemian Club in San Francisco. The image became an emblem of the loss of an era in the city, before the rebuilding began.

The portals were placed on the edge of the diminutive Lloyd Lake in Golden Gate Park in 1909 as a remembrance when the original location was cleared of rubble.”

“Portals of the Past, Golden Gate Park, Nov. 22, 1927.” I bet Grandpa Bob was way more interested in feeding the ducks. 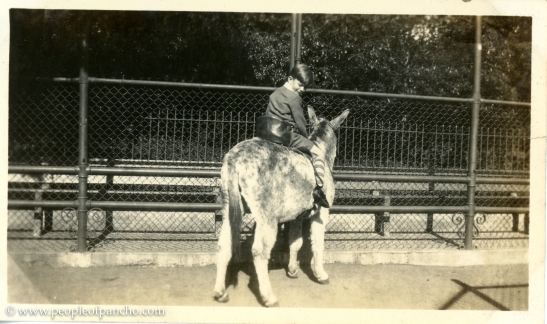 On November 24th, 1927, the family boarded the S.S. Yale to Southern California. Wikipedia describes the ship like this:

“SS Yale, a 3,731 gross ton coastal passenger steamship, was built by the Delaware River Iron Shipbuilding and Engine Works in 1906. In March 1918 the U.S. Navy acquired her from the Pacific Steamship Company of Seattle, Washington, placing her in commission later in that month as USS Yale. USS Yale served between March 1918 and September 1919. During World War I, the ship made 31 round-trip voyages transporting troops between Britain and France. Yale was decommissioned in early September 1919 and, in June 1920, sold for commercial operation along the Pacific Coast.”

There is still no truly civilized way to get from Northern CA to Southern CA — your choices are a butt-numbing seven-hour car ride vs. a veal-calf flight that takes nearly as long when you factor in security and flight delays — so I envy them their pleasant sea journey. Spending Thanksgiving Day at sea seems like good fun to me, so long as one isn’t plagued with seasickness. Given the amount of time the family spent on ships, I suspect that none of them were. 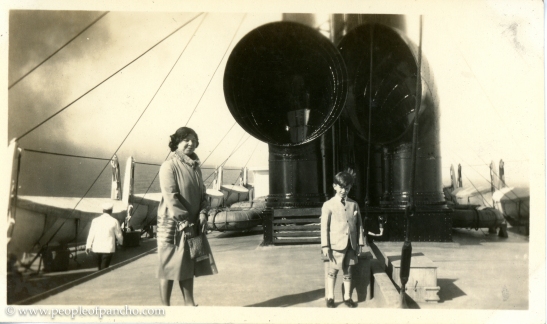 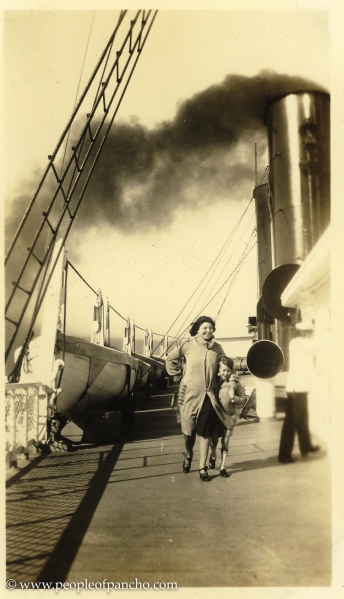 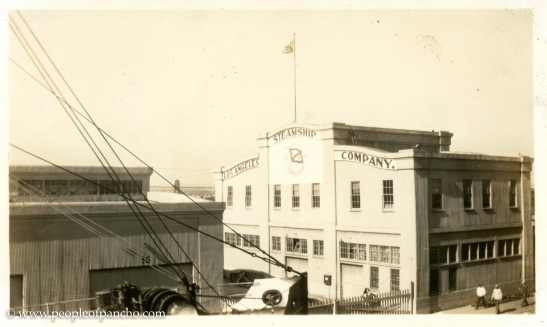 Next stop: Santa Catalina Island. Catalina is a rocky island 22 miles south-southwest of Los Angeles. The island is just eight miles wide at its widest point, and the main port is Avalon. I regret to say that I’ve never been there, but it’s on my list.

This very cool sticker was stuck onto a page of my Great-grandma Margaret’s photo album, but I was able to get a decent scan nonetheless. 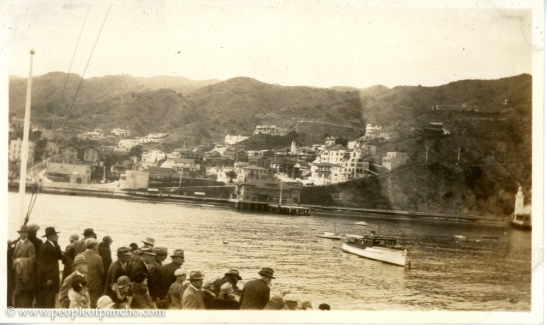 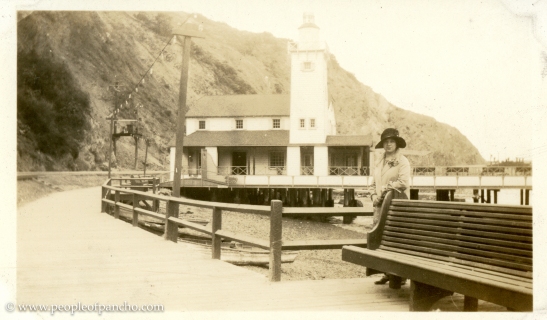 On November 27th they took a side trip to Tijuana. Man, these folks got around! 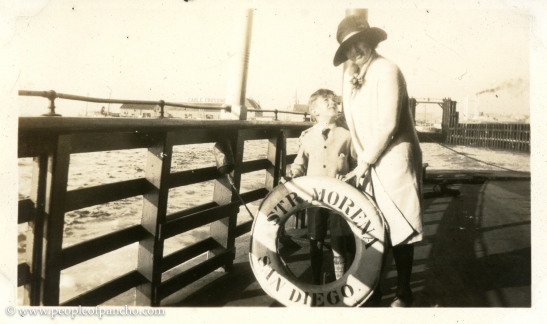 Next, back to LA and to the beautiful Ambassador Hotel. In later years, Leo would return to the Ambassador several times on business, so maybe this was a scouting trip. I have several of his complimentary “All Access” passes in my archive. I’ll share images from those trips in a later post.

According to Wikipedia: “The Ambassador Hotel was a hotel in Los Angeles, California, and location of the Cocoanut Grove nightclub until it was demolished in 2005. The hotel began operation formally on January 1, 1921. It was the site of the Academy Awards six times (the 2nd, 3rd, 5th, 6th, 12th, and 15th) and the June 1968 assassination of presidential candidate Robert F. Kennedy. The hotel closed to guests in 1989.

The Ambassador Hotel was located at 3400 Wilshire Boulevard, between Catalina Street and Mariposa Avenue in what is now known as Koreatown. It was designed by Pasadena architect Myron Hunt in an eclectic Mediterranean Revival style with Art Deco elements and signage. The Ambassador Hotel was frequented by celebrities, some of whom, such as Pola Negri, resided there. From 1930 to 1943, six Academy Awards ceremonies were performed at the hotel. Perhaps as many as seven U.S. presidents stayed at the Ambassador, from Hoover to Nixon, along with chiefs of state from around the world. For decades, the hotel’s famed Cocoanut Grove nightclub hosted well-known entertainers, such as Frank Sinatra, Barbra Streisand, Judy Garland, Lena Horne, Nancy Wilson, Bing Crosby, Nat King Cole, Liza Minnelli, Martin and Lewis, The Supremes, Merv Griffin, Dorothy Dandridge, Vikki Carr, Evelyn Knight, Vivian Vance, Dick Haymes, Sergio Franchi, Perry Como, Dizzy Gillespie, Benny Goodman, Sammy Davis Jr., Little Richard, Liberace, Natalie Cole, Richard Pryor and Shirley Bassey.

During the 1920s, the Ambassador Hotel’s nightclub Cocoanut Grove was frequented by celebrities like Louis B. Mayer, Charlie Chaplin, Douglas Fairbanks and Mary Pickford, Howard Hughes, Clara Bow, Rudolph Valentino, Gloria Swanson, Anna May Wong, Norma Talmadge and others. According to Photoplay, Joan Crawford and Carole Lombard were frequent competitors in the Charleston contests held on Friday nights; Lombard was discovered at the Grove. Starting in 1928, Gus Arnheim led the Cocoanut Grove Orchestra. Six to seven songs were sung each night. There was a two-hour broadcast of the orchestra on the radio. The names of the hotel and its nightclub quickly became synonymous with glamour; “Cocoanut Grove” would become a trendy name for bars and clubs across the United States.”

(Side note: I have to wonder if my Pop Yoder ever played clarinet at the Ambassador Hotel. Totally seems like his kind of joint, and he was West Coast guy.)

Next up, a little sightseeing at the Bernheimer Japanese Gardens.Read this fascinating article for glimpse at how the property looks today. “Operating today as Yamashiro, a Japanese restaurant, this was once a private home built by brothers Adolph and Eugene Bernheimer, German immigrants with familial roots in a successful New York-based importing operation.” 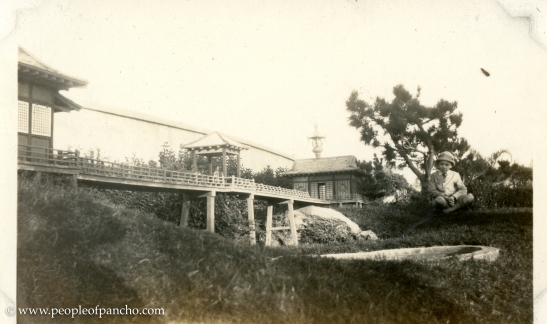 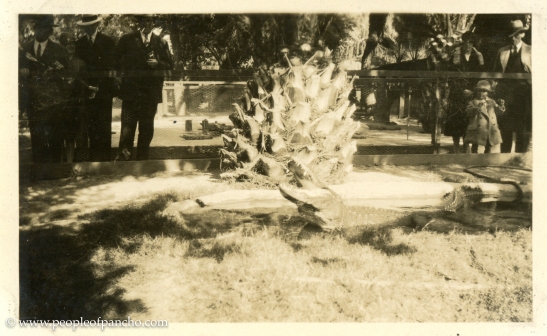 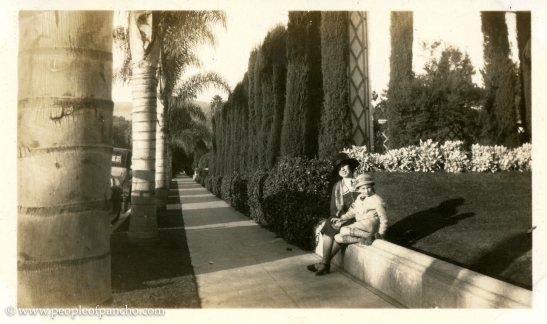 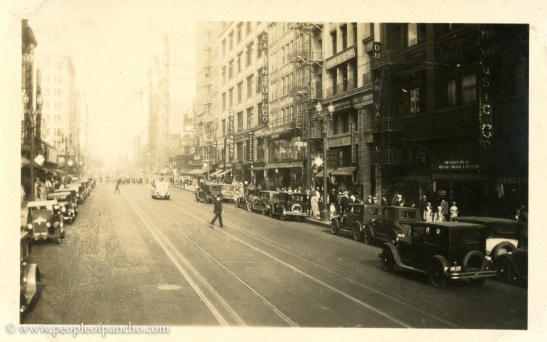 And finally, back to the Ambassador Hotel for a little swimming. I swear, my Grandpa Bob must have been the most patient child in the world.

Until next time, dear People.

8 comments on “Southern California Dreaming in 1927”