In my recent scanning binge, I came across several images of the same young man, which suggests that he must have been important to my Great-grandpa Leo. Eventually, I found a picture with a name written on the back, so now I at least know that his first name was Franz. I have no idea what his surname was.

The pictures I found are all from the years 1910 through 1913. I know that Leo came to New York in 1912, so it’s possible that distance and eventually WWI interrupted their friendship. I haven’t found any evidence of Franz after 1913 in Leo’s papers, but I still have a whole album of postcards to scan, so maybe something will turn up.

In the meantime, let’s get to know Franz.

Here is the earliest image, dated 1910 on the back in Leo’s handwriting. I gather that Franz was a navy, or Kriegsmarine, man because he appears in this uniform quite often.

This one is dated 1910 on the back, perhaps also in Leo’s handwriting, though it’s a little hard to tell. Franz is second from the left in the back row. 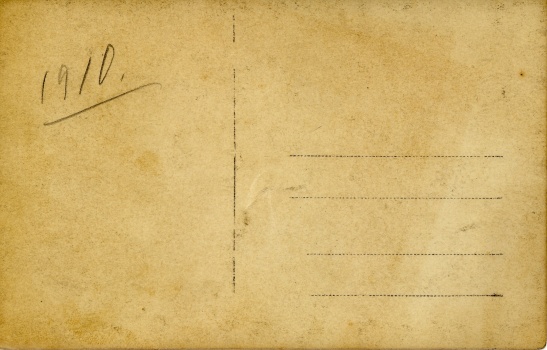 This cafe scene is dated 1911, and Franz is the pensive young man on the right. Assuming he was roughly the same age as Leo, he would be about 21 years old here. The postcard seems to contain messages from several different people, based on the handwriting samples, but I don’t yet know what they say. 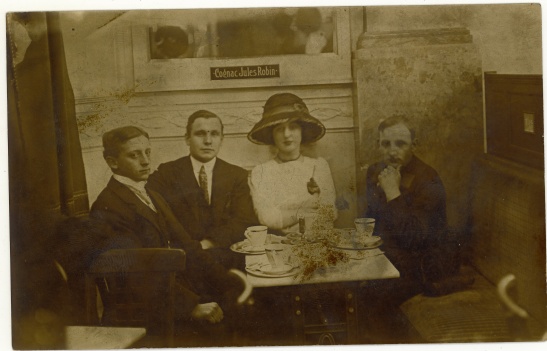 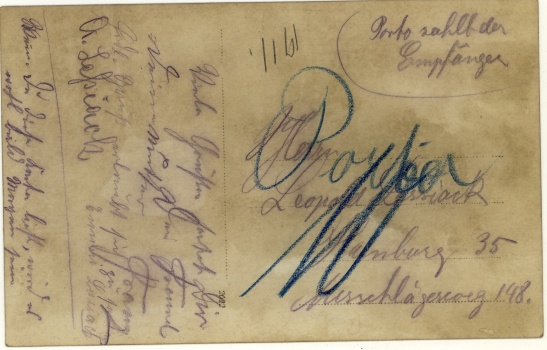 And now, for my favorite picture of all. I was an absolute nut about roller-skating well into my teens, so finding this image from the Velodrom Rotherbaum Hamburg really thrilled me. Other than Leo (on the left) and Franz (on the right), I can’t identify anyone else in the picture, including the woman clutching Leo’s hand. So many mysteries. 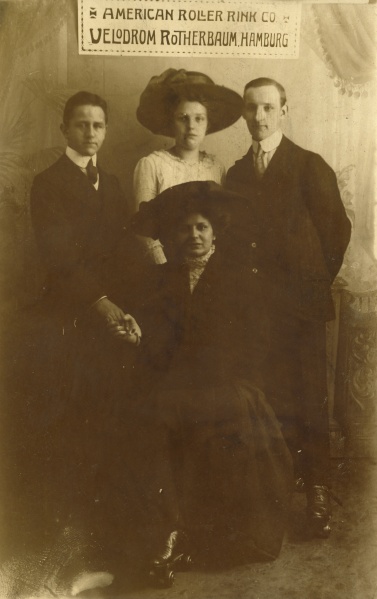 This park scene has some of the same people from the rollerskating picture. The hand-holding woman is in the front, Franz is directly behind her, and Leo is sitting on the left in a very snappy bowler hat.

Here is a postcard that Franz sent to Leo in Hamburg on March 3, 1912. The inscription on the table cloth says something along the lines of, “Now is still the blooming time…” which I interpret to mean that these young sailors were not yet seeing any action, but were expecting to; I can’t be sure, though.

My friend Maren Namdar, who also grew up in Hamburg, kindly provided the following translation:

I am sending you a friendly greeting to let you know that I will be declared to be an old chick in 20 days. (Maren: a chick in this case is a fledgling chicken.  The meaning is this:  I am having a birthday that puts me in the “old” category – but I am looking at this fact in good humor).

Best regards from a “stone-old” (as old as a fossil) soldier, 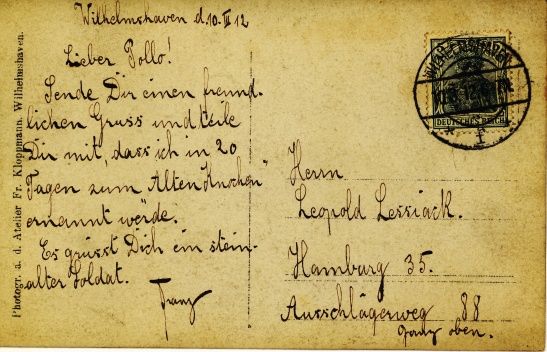 The next postcard is addressed to Leo in New York City on November 3, 1912, where the address indicates that he was staying with one E. Keil; this would be his sister, Emmi Lessiack Keil, who arrived in the US in 1911 to join her husband, Bruno Keil. Again, Maren came to the rescue with a translation:

Thank you for the adorable picture which I  picked up immediately.  My Mother was very happy to know that we were able to see one another once more.  On the 22nd and 23rd of last month we were in Hamburg with the Torpedo boat.  Fritz visited me on board.  My Mother is doing a little bit better.  Yesterday she got up for the first time.  How did you hold up during the voyage on the high seas?  How do you like it over there?  Do you have a job yet?  When are you coming back?

This just in from Maren: “Best regards from an old soldier who has only 145 days to go (in the Military) and please give my best regards to your sister and husband.”

I wonder if the mother mentioned in this message is the hand-holding woman from the roller rink and the park shown above. I also find this message fascinating because it suggests that Leo did not have a job with HAPAG waiting for him when he arrived in the United States, as I had always assumed. 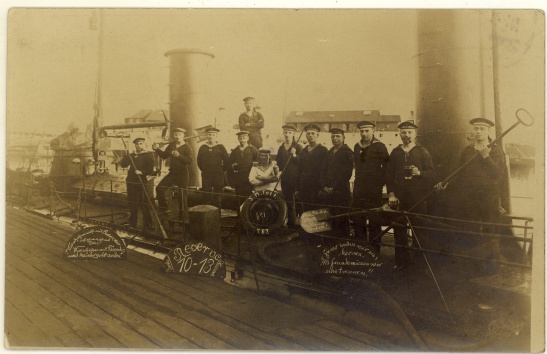 Here’s another image of Franz, this one labeled Wehrmacht 1912, Bergdorf. Wehrmacht was the name used for the unified armed forces of Germany from 1870 to 1918 (the period in which this picture was taken) and again from 1935 to 1946. Franz was part of the Kriegsmarine, or navy. This picture gives me the chills, because in two short years — Germany declared war on Russia in August of 1914, kicking WWI into high gear — things would begin to go horribly, horribly wrong for these young people, not to mention the rest of the world. It makes me sad to think of all the people caught up in the terrible conflicts that followed. 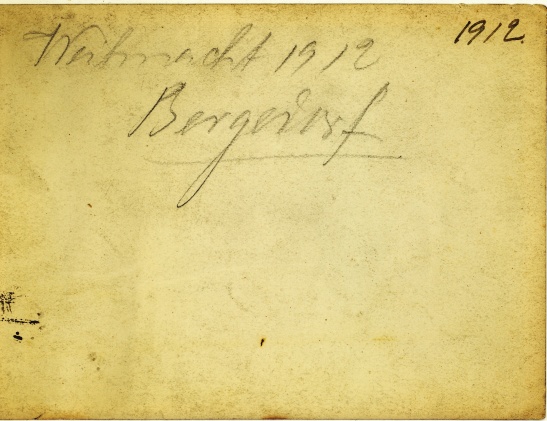 This one was taken in Amsterdam in 1913. Franz straddles the pipe in front of the life ring bearing the name of the ship, the S.M. Tpbt (which might be an abbreviation for S.M. Torpedoboot). The inscription is something along the lines of, “To my old friend Pollo, from his – Franz.” 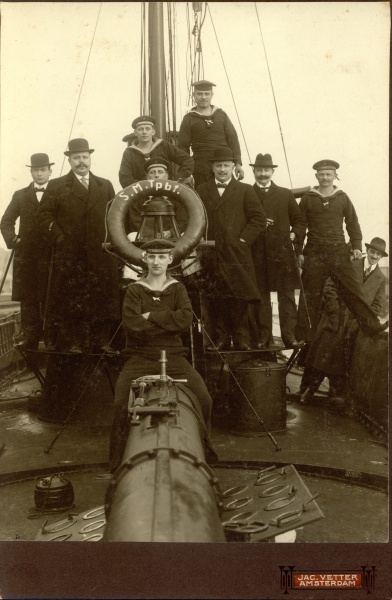 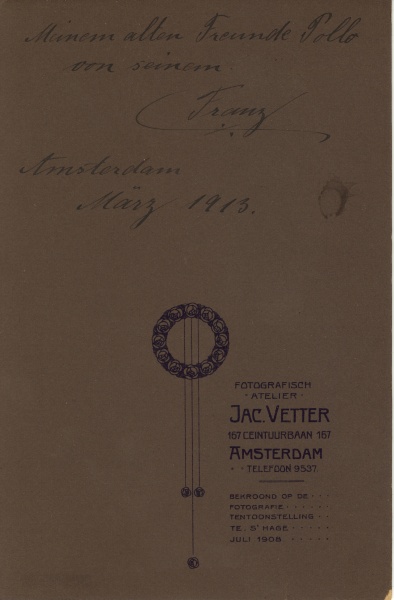 And finally, this idyllic beach scene says, “Summer 1913: Fritz and Franz” on the back. Fritz is probably the same person referred to in Franz’s postcard to Leo in New York, shown above. She might also be the woman in the Wehrmacht picture, but I’m not entirely sure. 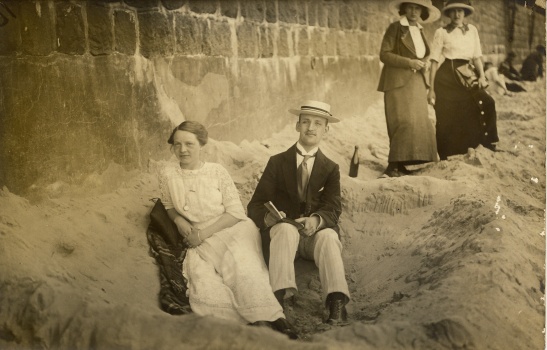 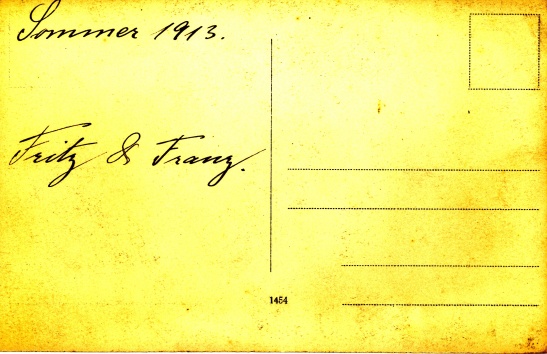 After this, the trail runs dry. There are no more photographs of Franz among my Great-grandpa Leo’s things, but I’m hoping to unearth some more postcards that might reveal more about Franz, and whether he and Leo remained in touch after the outbreak of WWI.

Stay tuned, People, and thanks for visiting.