Hello, People. Today I’m sharing the next installment in the Lessiack family travels, this time to the Golden State in 1927. I’m very fond of these photographs because I’ve lived in the San Francisco Bay Area for almost 30 years now, and it’s such fun to see old images of places that are now very familiar to me. The Bay Area is every bit as beautiful now as it was then, though quite a bit more crowded and expensive.

Most of the photographs in this post came from this beautiful but fragile and crumbling old black paper album, and my great-grandma Margaret provided captions for most of the images. I am so grateful that she took the time to do that. Friendly reminder: please do your descendants a favor and go label some photos today.

Great-grandma Margaret’s album of the family’s Western adventures. The album begins in Vaughn, New Mexico, and then branches out to both Northern and Southern California, as well as Arizona. 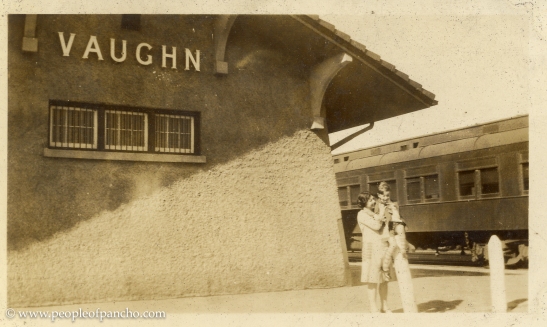 Great-grandma Margaret and Grandpa Bob (who was six years old on this trip) at “Vaughn, New Mexico, Sunday, Nov. 13, 1927.” Great-grandpa Leo doesn’t appear in many of these photographs, so I presume that he was the photographer in most cases. It’s fun to look at the world through his eyes. 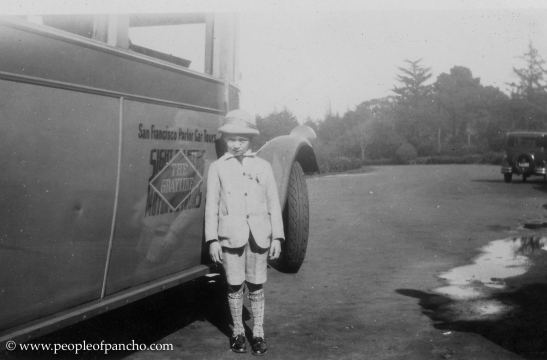 “Windmill Golden Gate Park, Bring water from Pacific for lakes in park. Nov. 20, 1927.” The windmill is still very much standing and visible today. You can see it when you drive by on the Great Highway. 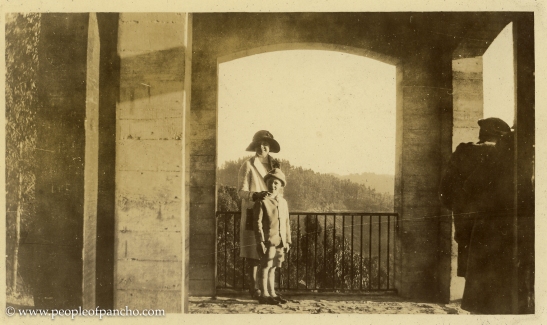 And here I must digress for an embarrassing personal story. The Greek is still a very active concert venue, and my husband, younger daughter and I were lucky enough to see Paul Simon play there in 2016. Not long after the legendary Mr. Simon had opened the show and launched into his second or third song, there was a distinct disruption in the audience right in front of where we were sitting. It turns out that Steve Kerr, coach of the Bay Area’s own NBA championship team, the Golden State Warriors, had entered with his family a little late, and they were trying to quietly find their seats without causing a ruckus. Fat chance. The audience erupted into echoing chants of  “Waaaaaaaaaaaaaaaaaarriors! Waaaaaaaaaaaaaarriors! Waaaaaaaaaaaaaarriors!” totally drowning out Paul Simon for a good five minutes.

Now, here is the embarrassing part. You have to understand that the team made it to the championship finals (ultimately losing to the Cavs) that year, and you have to know what kind of Warriors fans we are. We practically have a shrine to two-time MVP Steph Curry in our living room during basketball season. We look at Steve Kerr on TV a lot. 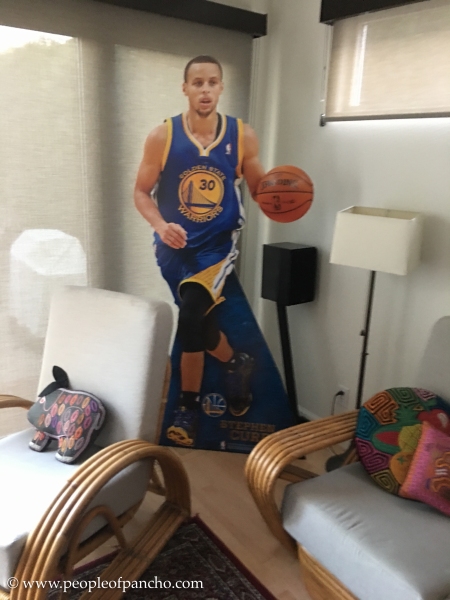 So, when Steve Kerr (in the bright blue T-shirt) walked right in front of us at the Greek, I did not, shall we say, maintain my dignity. “Steeeeeeeeeeeeve!” I screamed. “Steeeeeeeeeeeeeeve!” as if the poor man would know and recognize his dear old friend Pancho. Well, I was not alone in acting the fool because it took the crowd a solid five minutes to quit screaming “Steeeeeeeeeeeeeeeeeve! Over here! Look over here! Waaaaaaaaaaaaaarriors!Waaaaaaaaaaaaaarriors!” Paul Simon finally gave up and just let it happen because he clearly wasn’t going to be able to get a song in edgewise. When the Kerr family was finally seated and the crowd had simmered down a bit, Simon wryly threatened, “The next time Steph Curry goes to make a three, I’m going to walk onto the court with my guitar and ruin your game,” which of course only caused the crowd to go nuts again. 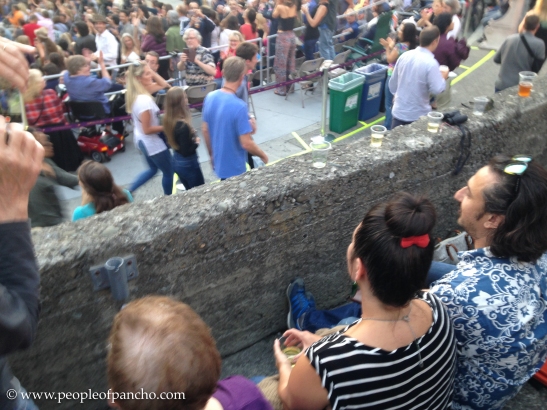 As it turned out, that was also the night that Mohammed Ali passed away, and so Paul Simon announced that sad news, and then closed the show with The Boxer, which left nary a dry eye in the house. It was an evening of emotional extremes, and utterly unforgettable on both counts. So, now you know why the photo of my sweet Grandpa Bob posing at The Greek makes me smile. We love the Greek.

Now, back to great-grandma Margaret’s album. 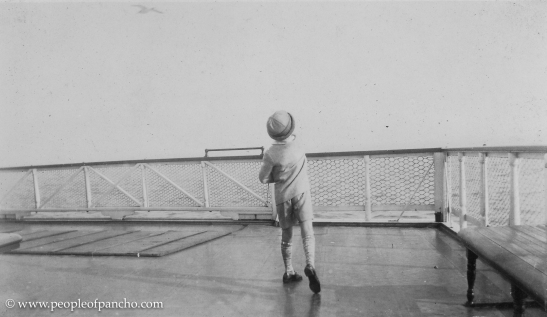 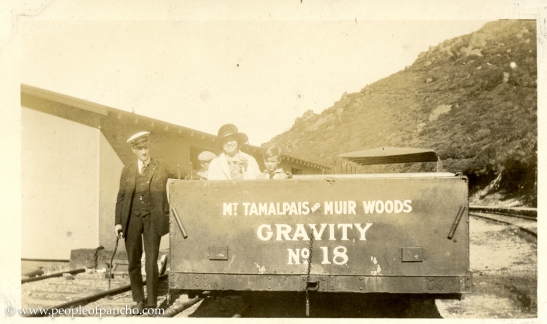 Grandma Margaret and Grandpa Bob on the “Gravity car going down to Muir Woods from Mt. Tamalpais, Nov. 18, 1927.”

Muir Woods became a National Park in 1908 during the Teddy Roosevelt administration. If you’ve never seen a Sequoia Semervirens up close and personal, do yourself a favor and make that happen, and if you’re not already a tree-hugger like me, these magnificent trees will turn you into one. They are simply awe-inspiring, and the largest trees have been around for thousands of years, which puts the whole piddly human experiment into its proper perspective. It’s quiet and magical and timeless in the Muir Woods, and the smell is indescribably glorious. 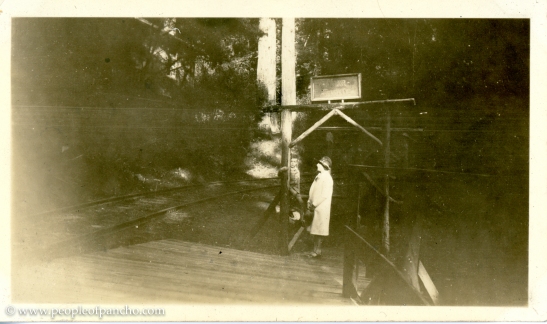 “May 30, 1927 – F. Ransome, photographer at Mt. Tamalpais and Muir Wood, California. 5701 Vallejo St. N. W. Cor. Stanford, Ave. Oakland, CA.” I have not succeeded in locating Great-grandpa Leo in this photo, but I think I might see Great-grandma Margaret over on the right not facing the photographer. Instead, she’s looking over to the left side of the photograph, where I think I see blurry little Grandpa Bob running around. Maybe Leo was just outside the frame looking after him. 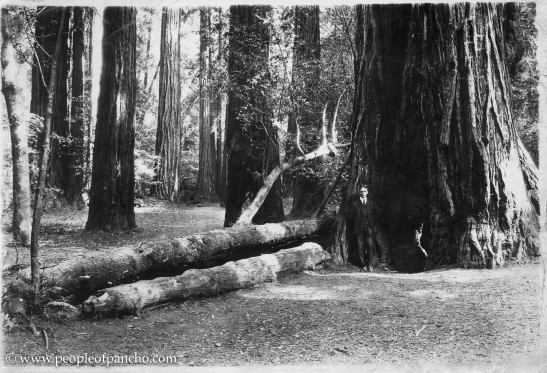 Here’s my favorite shot in the whole bunch. 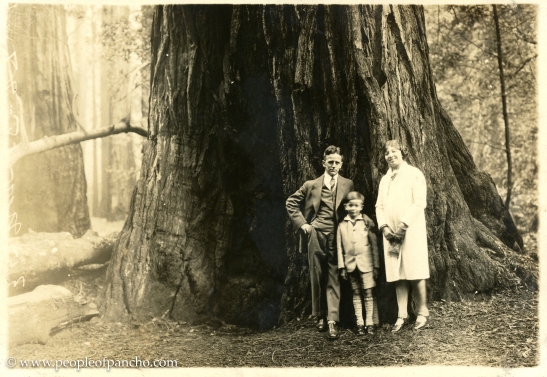 Next stop on the family trip: Sunny Southern California. Until next time, People. Thanks for visiting.

22 comments on “Northern California Dreaming in 1927”