Hello, People. Before I move on to the next leg of the Lessiack family voyages, I thought it would be interesting to share some of the images I have of my Great-grandpa Leo at his work with the Hamburg-Amerika Line. It was his job in the accounting department of that shipping line that made so much of the fun they had traveling as a family possible. This story is not without its shadow side, however, and I must not flinch from telling it. 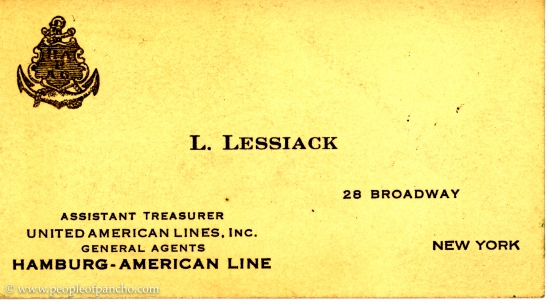 Great-grandpa Leo Lessiack at work in New York City. The calendar on the wall says 1928. He is in the immediate foreground. 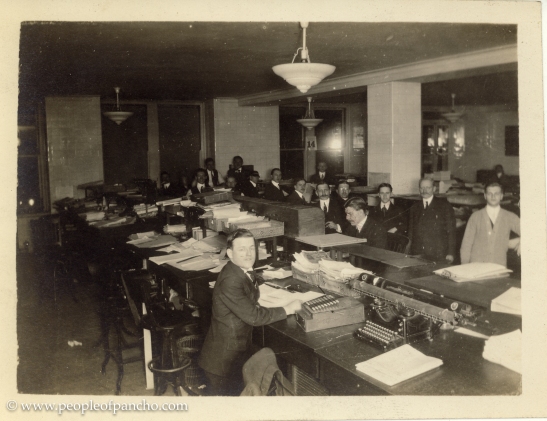 Photo stamped on back with the name “Herman Jaffee” who was probably the photographer. I don’t know the date of this image. Great-grandpa Leo is third from the right.

In 1933, Hamburg-Amerika Line merged with Lloyd Co. under Nazi supervision. According to Max Wallace in his book The American Axis: Henry Ford, Charles Lindbergh, and the Rise of the Third Reich (Macmillan, Aug 29, 2003), a 1934 Congressional investigation found that the Hamburg-Amerika Line subsidized pro-Nazi propaganda efforts in both Germany and the United States. In August 1942, the U.S. government seized the Hamburg-Amerika Line for violating the Trading with the Enemy Act. Here is the relevant passage from the book. You’ll recognize some familiar names in there. 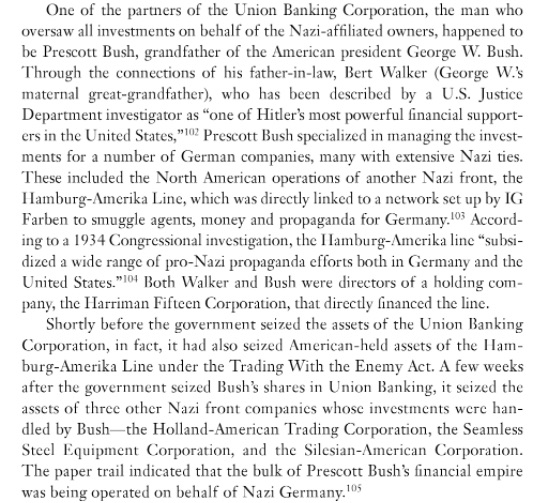 Great-grandpa Leo’s affiliation with the Hamburg-Amerika Line appears to have ended in 1939. I have no ironclad evidence for this, but 1939 is the last year for which I have his all-access pass. This is, obviously, well after the above-mentioned investigation in 1934. Yuck. Now I wonder if the note (below) that I published in my previous post was an attempt to account for his travels during this sensitive period of time. I do know that he had an absolutely terrible time finding any work in the U.S. after 1939. Family lore has it that this was due to his thick German accent, and that is probably true, but I can’t help but think that it was also because his resume was unappealing to U.S. employers, Leo having spent his entire professional career with a Nazi-friendly company.

I can’t say with any definite authority what he knew, when he knew it, or how he felt about it, but I cling to the following pieces of evidence that Great-grandpa Leo was not a Nazi sympathizer:

My theory (and that’s all it is, at this point, as I have much more research to do) is that 1939 was probably the year Great-grandpa Leo either resigned in solidarity with Capt. Buch, or was dismissed from the Hamburg-Amerika Line, possibly because his spouse was Jewish. Mind you, he and my Great-grandma Margaret both became naturalized U.S. citizens in 1925, so they were no longer German citizens. He also registered for the U.S. WWII draft in April of 1942, when he was 51 years old (!), and as I have already mentioned, my Grandpa Bob served as an officer in the United States Marine Corps reserves in the Pacific.

So, I’m pretty confident that my Great-grandpa Leo was not a Nazi sympathizer. He was a long-time Hamburg-Amerika Line employee who probably hoped that the whole hateful Nazi thing would blow over, much the way many U.S. citizens today hope and pray that the whole hateful, racist, xenophobic “Make America Great Again” thing that is currently the law of our land will blow over. (For the record, let me state my position for any descendants who might read this and wonder where I stood during the MAGA years: There are not “many sides” to blame for the violence in Charlottesville, there are only neo-Nazis. Immigrants from all over the world are what make America great, and a person’s country of origin or the color of their skin in no way determines their worth as a human being. We have a moral duty to accept and help refugees, because there but for the grace of God go we. That, children, is what your Great-great-Grandmama Pancho believes with all her heart.)

With that necessary Hamburg-Amerika Line information behind us, let us return to happier artifacts of Great-grandpa Leo at work. He clearly loved his job, and his colleagues clearly loved him back, as subsequent posts will show. Unfortunately, now I am forced to wonder who, if any, among these many smiling faces might have been Nazi sympathizers. I’m reasonably sure my great-grandpa Leo, my Jewish great-grandmother Margaret Spielmann Lessiack, and their dear friend friend  Capt. Frederich Buch were not among them, but gosh, in what close proximity they came to unspeakable evil.

“The Hamburg-Amerika Line outing, Midland Park, S.I., August 20, 1927.” Capt. Buch and Great-grandpa Leo are in the back row, toward the middle. Special thanks to my husband who performed Photoshop magic to stitch this image together for me, as I had to scan it in segments. The actual paper photo is more than two feet long! 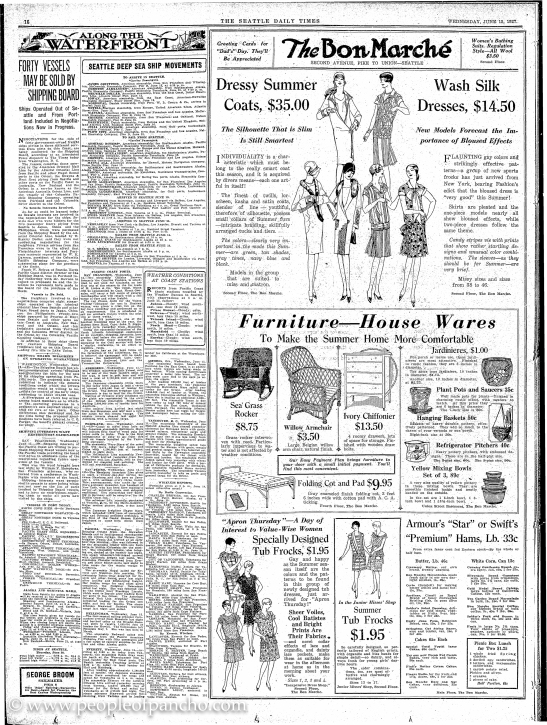 A page from the June 15, 1927 edition of The Seattle Daily Times, in which Leo was quoted (zoomed in below). 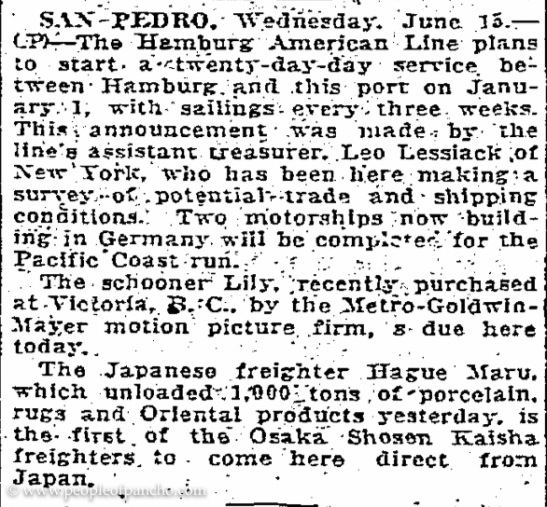 In a future post, I’ll show pictures that I think are related to the above-mentioned schooner Lily and Great-grandpa Leo’s travels in Hollywood. They’re fun. 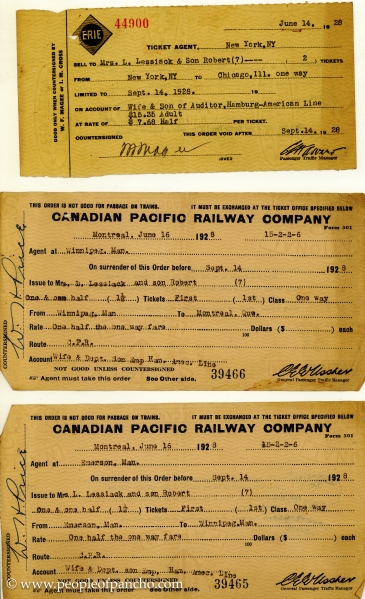 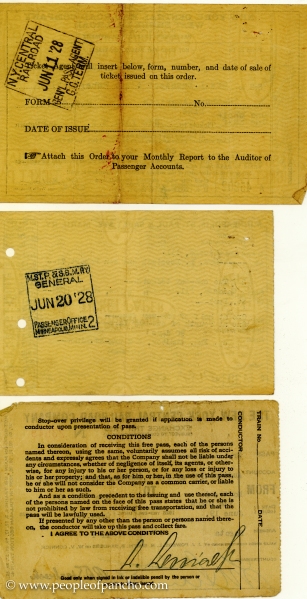 1928, the backs of the Railroad passes 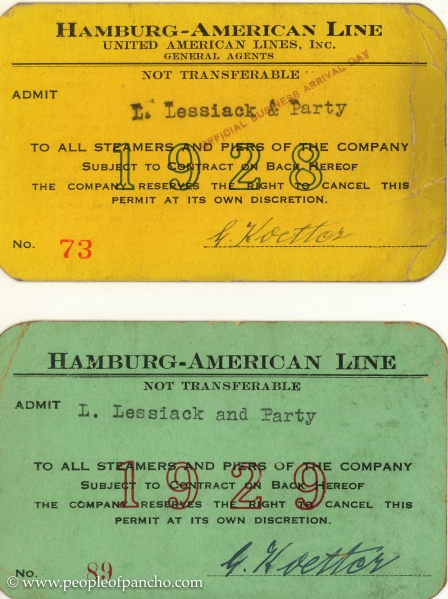 Here in the United States, today is the day we set aside to honor Dr. Martin Luther King. As I contemplate my Great-grandparents’ and Grandparents’ troubled times, I cannot help but also contemplate our own troubled times, and to offer the following words from Senator John Lewis, who was a fierce ally of Dr. King, and who continues to be a fierce advocate for civil rights today:

“If Dr. Martin Luther King Jr. was preaching today, he would be speaking the idea that we are one people, one family, one house—the American house and the world house—that we must learn to live together as brothers and sisters, if not we will perish as fools.”