Adorableness on the High Seas

With the saddest post I’ve ever researched now behind me, I’m moving on to happier subjects. Today I return to the semi-chronological telling of the story of my great-grandparents, Franz Georg Leopold Lessiack and Margaret Spielmann Lessiack, and I share some of my very favorite photographs from my archive.

In June of 1924, less than a year after the train crash at Kreiensen killed Leo’s mother, sister, brother-in-law, niece, and nephew, the Lessiacks of Bogota, NJ returned to Hamburg on the S.S. Westphalia. As an auditor for the Hamburg-Amerika Linie, Leo did a great deal of traveling in the decade that followed, and he often brought Margaret and my grandfather, baby Bob Lessiack, with him. I don’t know if this was common practice at the time, if this family was unusually close, or if Leo just wasn’t letting loved ones out of his sight anymore. Whatever the case, the Lessiacks traveled widely. My grandpa Bob sometimes talked about having been lonely as an only child, but I think he also benefited to some degree because it would have been very difficult for Leo to drag a larger family around the world.

It’s also worth noting that Margaret’s father, my great-great grandfather Hermann Spielmann had also passed away earlier in 1924 while on the job for United States Lines. This little family had suffered a lot of loss in a very short time, a fact that’s easy to overlook amidst all the smiles and exotic locations to come. They were in mourning, and probably struggling emotionally.

On to the journey. Here is my great-grandpa Leo’s United American Lines identification card for 1924. As a Hamburg-Amerika employee, I don’t know exactly why he had a UAL ID, but I suppose that UAL and HAPAG had some sort of reciprocal arrangement. We know that the two shipping lines collaborated to get the Lessiack siblings to and from Hamburg after the tragedy at Kreiensen.

Next up is the family passport. Leo and Margaret were not yet US citizens at the time of this journey — that happened in 1925, and will be the subject of a future post. Baby Bob Lessiack, having been born in New Jersey, was already a citizen. When I hear certain politicians demonizing “anchor babies” it really ticks me off because I am the product of one, and I know that our country gained so much from my grandfather’s military service in WWII and later service to the Panama Canal. How quickly we forget. Paperwork in order, the family set sail on the S.S. Westphalia in June of 1924. I love these pictures so much. 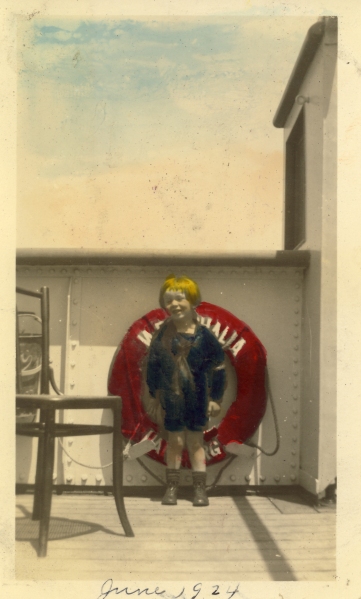 “Bobby on SS Westphalia en route to Hamburg, June 1924,” written on the back in my great-grandma Margaret Spielmann Lessiack’s hand. 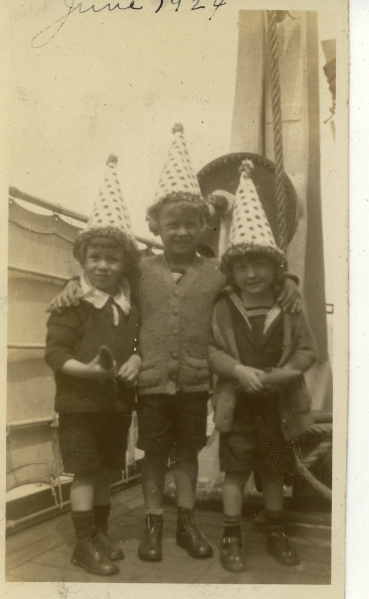 “Children’s party on SS Westphalia en route to Germany, June 16, 1924.” This looks a whole lot more fun than airline travel, doesn’t it, People? I think my grandpa Bob is the boy in the sailor suit with his back to the camera. The spooky horse and pig in the back row crack me up.

Here is my grandpa Bob sitting on the lap of Captain Buch, the founder of our Christmas Winkie tradition. Captain Buch was a dear friend of the Lessiack family, and they visited each other often, according to my grandfather.

“On board Kehrwieder, Tender to SS Westphalia, June 26, 1924.” My great-grandpa Leo is on the left, great-grandma Margaret in the center, and grandpa Bob down in front. I don’t know who the other people are.

According to wikipedia, “A ship’s tender, usually referred to as a tender, is a boat, or a larger ship used to service or support other boats or ships, generally by transporting people and/or supplies to and from shore or another ship. Smaller boats may also have tenders, usually called dinghies.” So, now you know.

I don’t have much firm evidence of what the Lessiacks did while they were in Germany, except for this one shot of Baby Bob. That hat slays me.

“Near Uhlenhorster Farhaus, June 1924” on the back.

Thanks to ancestry.com, I do know that the family returned to the United States on June 26th, 1924. Seems like a rather short trip, which makes me wonder if great-grandma Margaret might have mis-dated some of the photographs.

I also made one other fabulous discovery in researching this post. The New York Public Library hosts a most amazing online collection called What’s on the Menu? that includes many vintage menus from the Hamburg-Amerika Linie and many other interesting venues. While I wasn’t able to find the menu for this particular journey, I did waste a blissful hour “sampling” some of the delicacies on offer. Whatever the menu on the SS Westphalia in June of 1924, it appears that my ancestors ate well on board.

11 comments on “Adorableness on the High Seas”