Well, People, if I’m working in chronological order, then I can’t avoid telling this sad tale any longer. It’s the strangest feeling to miss and mourn people that I never actually knew, but there is no other way to describe my reaction to the story I’m about to relay. All the time I’ve spent peering at old photographs and connecting faces to clues has made me feel very close to these ancestors. To know that my dear great-grandpa Leo suffered such a tragedy makes me treasure his playful, kind, gentle spirit all the more–a lesser person would have been absolutely destroyed by so much loss.

Let’s get it over with.

Here are my great-grand aunt Emma Lessiack Keil, her husband Bruno Keil, and their children Wally Keil and Leopold Keil. The photo says “July 1921” on the back, but “1920” on the front. According to my calculations, neither date can be correct given how grown-up the children look relative to when Leo and Margaret picnic’d with them in 1919. I think this picture was taken closer to 1922, but I don’t know where. 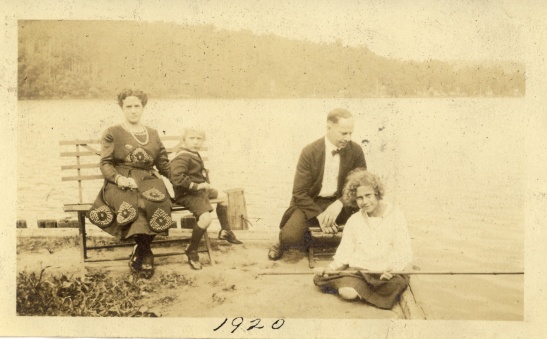 What I do know is that Emma applied for a U.S. passport on behalf of herself and the two children on June 19, 1922, with the intention of traveling to visit relatives in Germany later that same month. Wally is identified as 9 years old, and Leopold as 5 years old, which seems to match the kids in this photograph pretty well. The plan was for them to travel aboard the good ship Wurtenburg (a Hamburg-Amerika property) out of New York on June 29, 1922. The application provides confirmation of several other facts that I’d already learned about my great-grand-aunt Emma, such as the name and birthplace of her and Leo’s Father (Anton Ludwig Lessiack, born in Austria), the fact that he was deceased by this time, the place of Emma’s birth, the date of her emigration to the U.S., and where the Keil family lived at the time of the application. 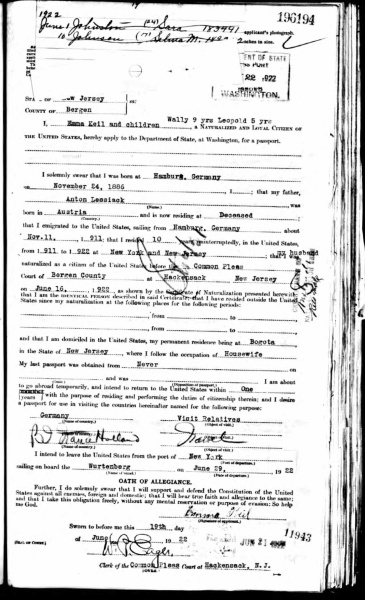 It’s curious to me that Emma didn’t apply for her passport sooner, given that they were scheduled to travel a mere ten days later, but perhaps the plan came together quickly. The application says that Bruno Keil became a naturalized U.S. citizen on June 16, 1922, just three days before the date of this application, so perhaps it wasn’t possible for Emma to apply before then.

It’s also possible that she was trying to overlap with a Lessiack family visit to Großmutter Marie Puhlmann Lessiack in July of 1922. Here are my great-great grandmother Marie, my great-grandfather Leo Lessiack, my great-grandmother Margaret Spielmann Lessiack, and my dear grandfather Robert (Baby Bob) Lessiack. The back of the photo says “July 1922, Harz Mts, Germany.” It’s a postcard to Mrs. F. Bielitz (no address, but that would probably be Margaret’s sister, Lillian Spielmann Bielitz). 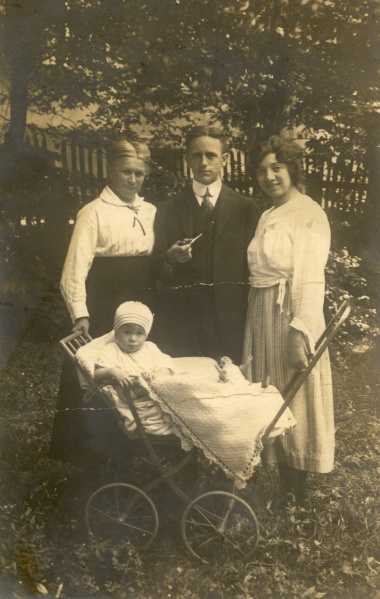 The Keil family took another trip to Germany a year later, as evidenced by this photograph. The caption on the back says, “Fur der Luke, May 1923” (the 1922 date written on the front is probably incorrect), and the photo shows Wally Keil on the far right, Großmutter Marie Puhlmann Lessiack in the center in the black hat, and possibly Leopold Keil and Emma Keil second and third from the left. 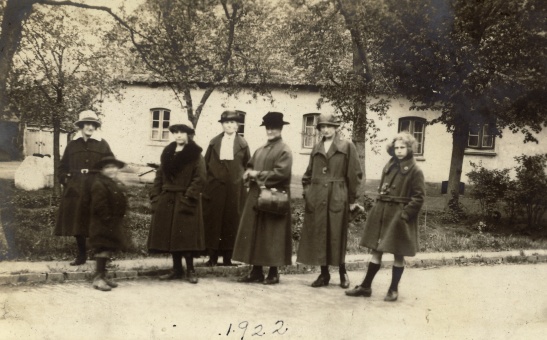 I haven’t found any ship manifest evidence, so how the Keils traveled to Germany on that trip remains a mystery for now. But, I do know they were all in Hamburg on July 31, 1923, because on that date the unthinkable happened. There was a terrible train wreck in Kreiensen in which the entire Keil family and my great-great-grandmother Marie were killed.

The cause of the wreck was a disabled train stuck at the train station. The Hamburg-Munich train was set to drive through the station at normal speed because it was not supposed to stop there, and instead it hit the disabled train at full speed. I don’t know which train my relatives were on, but the result was catastrophic. Forty-seven people lost their lives, and the Kreiensen train station roof was also damaged.

According to Wikipedia: “An express overrunning a red signal crashed into another express which stood in the station due to a defective locomotive. Gerhard Domagk, winning the Nobel Prize in Physiology or Medicine in 1939, travelled in one of the totally destroyed coaches and escaped just by chance: He had left the train to get something to drink in the station.”

I found several brittle and yellowed clippings among my great-grandpa Leo’s things. As I ponder them, I have a hard time comprehending the emptiness and despair he must have felt at losing so many loved ones all at once (it is, after all, my personal nightmare come true). A major focus of this blog has been on discovering the close and loving relationship between Leo and the family of his sister Emma, the Keils, so the loss seems particularly cruel. 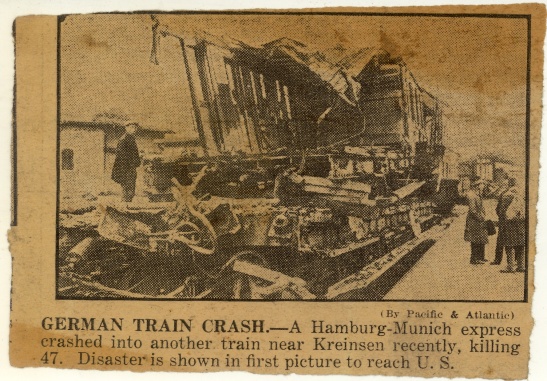 My dear friend Maren translated some of the articles for me. 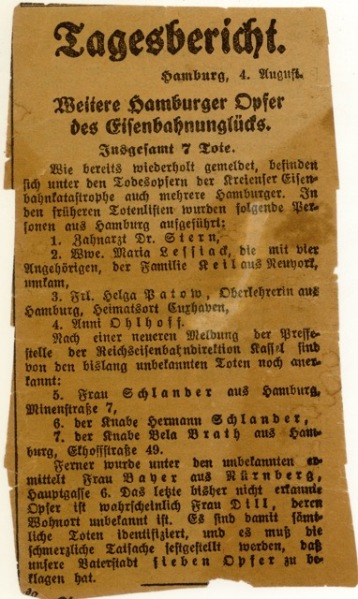 Additional victims from Hamburg in the train accident. As reported previously, among the dead who perished in the Kreiensen train accident there are also several residents of Hamburg. In the early lists of fatalities, the following persons from Hamburg are mentioned:

2. The widow Maria Lessiack who was killed along with four relatives, the family Keil from New York.

A new dispatch from the Reich’s Train Management Department indicates that among the heretofore unidentified dead, the following have been identified:

Among the formerly unidentified was also Mrs. Bayer from Nurenberg, Hauptstrasse 6.
The last unidentified victim has been tentatively identified as Mrs. Dill, address unknown. After all identities have been established, it is a painful fact that Hamburg has lost seven of its residents.”

The following obituary was placed by relatives of my great-great grandmother Marie Puhlmann Lessiack. 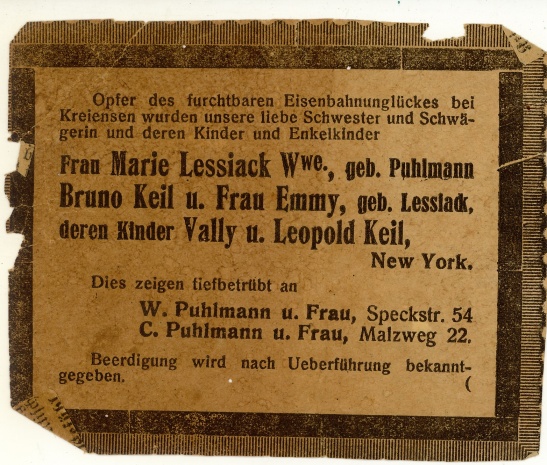 “Victims of the terrible railway accident were our dear sister and sister in law and their children and grandchildren…” and then something about burial arrangements to be announced later.

I will follow up on these clues, along with those found in Marie’s letter, at another time; I know next to nothing about my Puhlmann People, and am eager to learn more. I’m pretty sure that I have pictures of some of them, but I’ve not yet been able to connect faces with names.

The following notice was placed in the newspaper by Bruno Keil’s colleagues on the S.S. Resolute, a United American Lines property. I hope to uncover more details about Bruno’s career with U.A.L., and I find it so interesting that he too (along with Leo and several of my Spielmann relatives) worked for a shipping line. 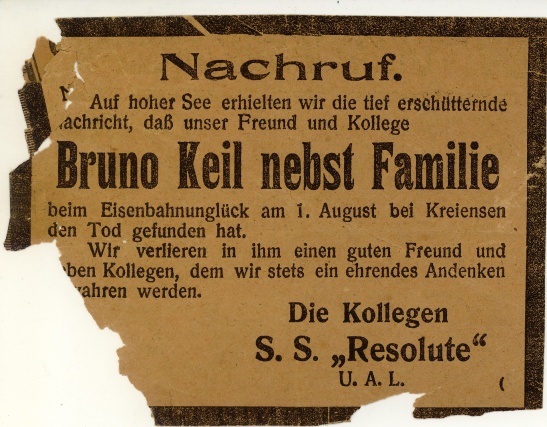 I cobbled together a fairly terrible translation using Google Translate:

“On the high seas, we were given the deeply harrowing message that our friend has been killed, our colleague Bruno Keil together with his family at the railway mishap on August 1 in Kreiensen. We lose in him a good friend, we always honor his memory … dear colleagues.
colleagues
SS Resolute
U.A.L. “

Not long after, but I don’t know exactly when, the funeral of our five precious Keil and Lessiack People was held in Hamburg. This undated article describes the event. I highly recommend some tissues at this point, especially if you listen to the music.

“At the Coffin of Five Victims of the Train Accident

On Wednesday the internment of the widow Lessiack took place, along with four members of the Keil family consisting of husband, wife, son, and daughter, from New York, who were joined in death together. The cruel fate that has struck these five related victims has touched the hearts of Hamburg’s citizens. It was evident by the huge crowd attending yesterday’s funeral. In Chapel No. 5 of the Ohlsdorf Cemetery, as well as the entry area, people stood close together. In front of the chapel there were thousands of mourners waiting to pay their respects when the coffins were to be carried outside. The chapel itself was decorated with an enormous amount of roses and countless wreaths surrounded the five coffins which were totally covered with roses.

Organ, violin, and cello started the service with Händel’s ‘Largo.’

At the conclusion of the service the above-mentioned girls’ choir sang: ‘Ich ging im Walde so fur mich hin.’

Now the pallbearers took up the coffins and an almost endless procession formed that accompanied the dead to their final resting place. The procession was led by a strong commando of railway staff, then the five coffins followed, Mrs. Lessiack, Mr. Bruno Keil, Mrs. Keil, and then the children, Wally and Leopold Keil. Immediately following were the mourning members of both families, and then the huge crowd of participants, some of whom may have been there for pure curiosity. After the coffins had been lowered into the graves, Pastor Wilhelm Heydorn once again touched the hearts of everyone with his words. The representatives of the railroad president, an Oberregierungsrat (a high government official) spoke on behalf of the Reichs Railroad Management. All of them offered their most sincere condolences. Then the girls’ choir sang: ‘Der Mond ist aufgegangen’ by Matthias Claudius.

I have to wonder if my great-grandpa Leo, who so loved opera and other music, had a hand in choosing the beautiful pieces that were played.

Among Leo’s things, I found the following receipt from the cemetery, along with the photograph below. 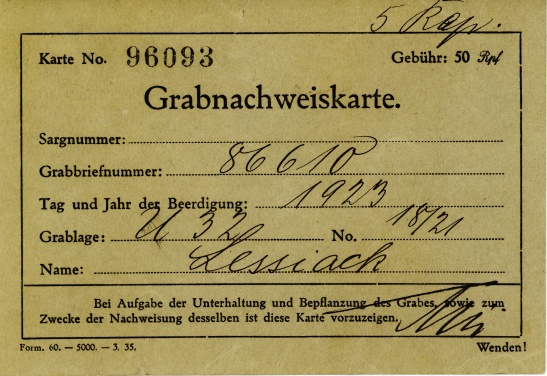 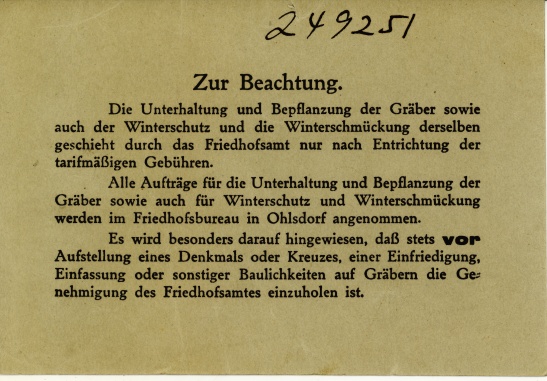 Based on what I was able to glean from Google Translate, I think this says something to effect that no maintenance or decoration of the grave is allowed until the fees are paid, and that no decorations, crosses, buildings, or enclosures can be added to the grave without permission from the cemetery office. This focus on commerce in the face of tragedy seems so cold, but I suppose it’s a necessary part of things. Based on the following picture, it looks like all the right things happened. 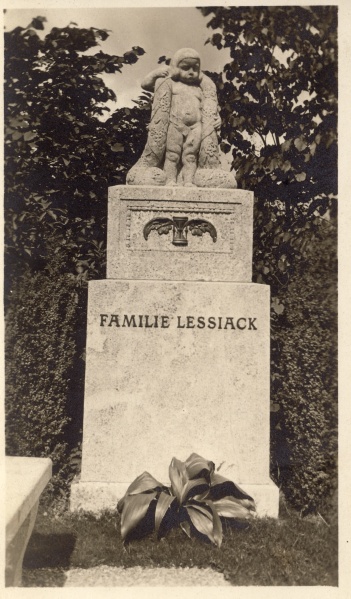 The grave is marked as the “Familie Lessiack”, so I have to wonder if my great-great-grandfather Anton Lessiack was also buried there. I don’t know if the grave survives, but if and when I make it to Hamburg, I will certainly make it my business to check. Hamburg suffered brutal bombing during WWII due to its importance as a trade and transportation hub, and from what I understand, German cemeteries sometimes “recycle” graves due to a lack of space.

The next phase of the tragedy involves, inevitably, a great deal of bureaucracy. I will cover all of that in my next post.

One other note: I will be on hiatus for a week or so to recover from foot surgery happening tomorrow. I’ll do my best to respond to comments and questions as soon as I’m able to. Along with a bunch of much less fun medical gear, I bought myself a nifty little portable scanner that fits in my lap, so I hope to make the 4-6 weeks I’ll be laid up at least a little bit productive, blog-wise. I am a terrible rester, People.

27 comments on “Heartbreak in Hamburg”