Our family always called Great-grandpa Franz Georg Leopold Lessiack by the nickname “Leo”, but I have a great many postcards addressed to “Pollo Lessiack” which I assume is also a nickname for Leopold. Most of them are handwritten in German, and thus difficult to decipher. I’m working on it, though, because I know there’s a wealth of information about Leo’s friendships, travels, and concerns buried in them.

Here’s one of the rare postcards in English, even though it was both sent and received in Hamburg in November of 1908. Leo would have been 18 years old when he received it.

The shop (and family, I presume) of Carl Kellerborn.

This was a fun card to explore with my magnifying loupe, because you can almost taste the delicacies for sale at the well-stocked  “Carl Kellerhorn Delicatessen and Wein…” (the sign in the window is cut off). Among the comestibles on offer are “A. Zulnz Java Kaffee”, and “Feroni Schwarzbrot” which translates to black bread. Along the top of the display are glass jars containing different kinds of sweets, and a variety of wine bottles are assembled in the left side of the window. Canned goods and fruits and vegetables are stacked in the center, and hanging on the right appears to be a stalk of ripening bananas, which must have been quite the exotic treat in that cold northern city. Food adventurer that I am, this shop looks like a place I would totally want to hang out.

And what does the postcard say? It’s addressed to Mr. Pollo Lessiack, Ausschlägerweg, Hamburg, Germany, and it reads:

My dear friend: I am awaiting you tomorrow in the morning with the train 8:39 h. at the central railway station. The best regards to your parents.

I am your friend, 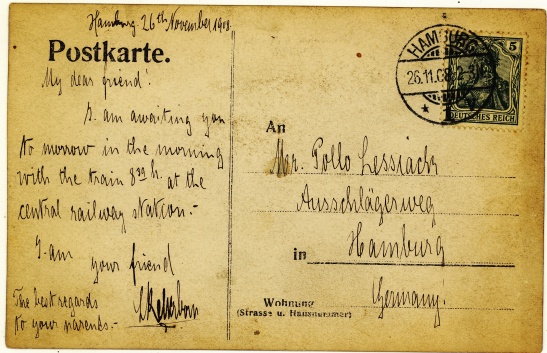 I don’t know if the mysterious “L” is one of the people pictured in front of the shop or not, but it sounds like Leo is about to have an adventure. Whatever the case, I bet he was well fed.

13 comments on “Postcards to Pollo”

This entry was posted on December 8, 2014 by Pancho in Lessiack People and tagged Franz Georg Leopold Lessiack, Hamburg, Pollo Lessiack.