In combing through my less-than-organized archives in search of something else, I came across this treasure of a letter from my piano teacher in the former Panama Canal Zone, the elegant, talented, and ever-so-patient Professor Henry Augustus Trym. 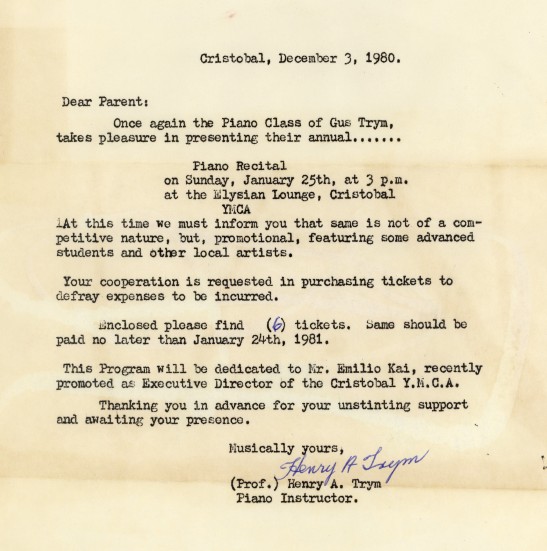 Professor Gus Trym. Photo from the collection of Vanderbilt University

To call me an “advanced student” is a perfect example of Professor Trym’s tact and delicacy. Yes, I had taken piano lessons for a very long time — I persisted in lessons between the ages of 7 and 17 at the insistence of my Mom —  but not even the kindest listener would call me advanced. I was about as reluctant and stubborn as it was possible for a piano student to be, and recitals sent me into paroxysms of nausea and dread. I’ve never had any trouble talking, singing, or dancing in front of people, but piano recitals were my Waterloo. Nevertheless, I struggled through them. You simply didn’t say no to Professor Trym.

This photo might actually be from the recital referred to in the letter — I’m about the right age.  Notice the crap technique there in the left hand.

Professor Trym was a gentleman in the truest sense of the word. In spite of the sweltering heat of the un-airconditioned Cristobal YMCA where I had my weekly lesson, he always wore a three piece suit and a fedora hat (which he removed indoors). Every once in a while, he would mop his face with a clean white handkerchief, possibly to deal with sweat, but possibly just to hide his amusement at my poor playing and virtuoso excuses. When the handkerchief came away, he was always the picture of stern calm, but the twinkle in his eye told the real story. How he managed not to scream in frustration at me (or at my fellow piano student and good friend, Yvette, who was deep into her crazy Flo Jo nails phase at the time) I will never know.

He was well known among churchgoers of all denominations on the Atlantic side of the Canal because on Sundays he sat behind the organ at the Fort Davis chapel and played for one service after another — first the Catholics, then the Episcopalians, then the Lutherans, then the Methodists, and so on throughout the day. Given the sheer number of hours Professor Trym put in at church, not to mention his monumental patience, his place in heaven is secure.

I was delighted to find Professor Trym included in Vanderbilt University’s oral history project “Voices From Our America.” Give it a look and a listen to learn about Professor Trym’s real musical career (the part that did not include listening to under-practiced teens hack their way through Beethoven).

What little skill I have, I owe to you, Professor Trym. You were a role model in more ways than one. Thank you.