Pop Yoder was a Swinger

Not that kind of swinger, People. Settle down. I mean, Pop Yoder could really swing, big-band style. Stay with me here.

Pop Yoder was the stepfather of my maternal grandmother, Katherine Adams Lessiack, whose own father died when she was a little girl. I’ll cover him in another post. This one is about the great-grandfather I grew up with, the man we all called “Pop,” except for my great-grandmother, Mama Helen, who called him “Buckley.” 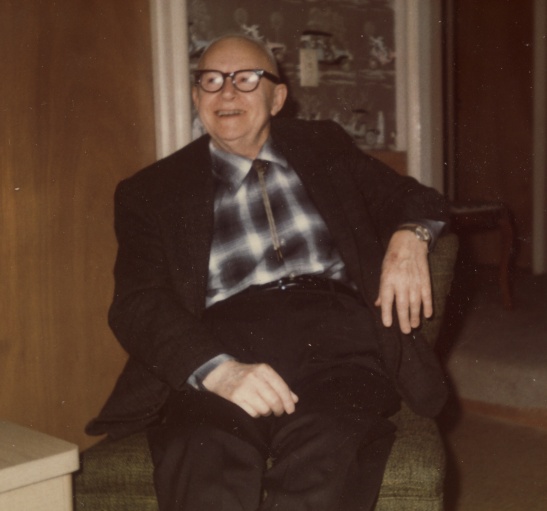 On back, in Mama Helen’s handwriting: “Buckley.” Date and photographer unknown.

Pop’s real name was Austin Flagel Yoder, but the world knew him as Buck Yoder, a professional clarinet and saxophone player. Buck Yoder played with some pretty big names back in the day.

Here he is with the Paul Whiteman Band during WWI. You need only watch Ken Burns’ Jazz to learn all about Paul Whiteman. 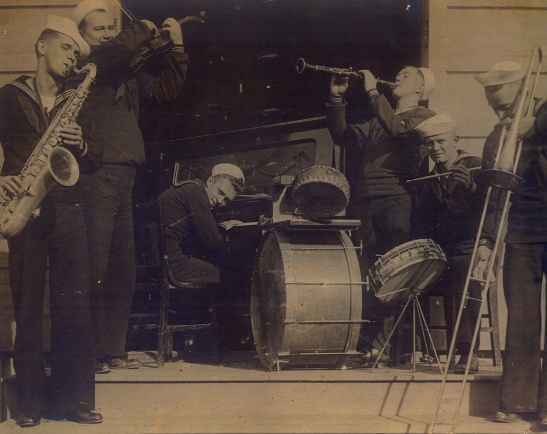 This photo was published in the Modesto Bee in January of 1968 with the following caption: “The band that started the dance band trend: from left, Lew Reynolds of Modesto, Paul Whiteman, Gene Rose, Buck Yoder, George Williamson, and John Klock.”

Pop joined the US Navy in WWI as a musician, enlisting as a Musician First Class out of Portland, OR, and serving for two years. In spite of a few scars and a hernia, it appears that he spent zero time on the sick list during his service. Though he rated only a 3.12 in proficiency as a musician, he was obedient (4) and sober (4), which netted him a 3.7 average (out of what, I don’t know).

Here is his 1919 discharge certificate.

Here’s another shot of Pop in action with George Olsen’s band in 1920.

On the back, in Mama Helen’s handwriting is, “George Olson’s band, 1920 New York. Austin F. Yoder 4th from the right, with saxophone. George Olson, in center.” Photographer unknown.

A Portland, Oregon boy like Pop Yoder, George Olsen and his band eventually moved to New York where they appeared on Broadway in several shows, including the Ziegfeld Follies of 1924, and Eddie Cantor’s 1928 hit Whoopee. They later recorded the sound track for the 1930 movie version. I actually watched the movie the other night and, while the music was delightful, the visuals made me squirm — Eddie Cantor chews the scenery in blackface, and there is also a truly regrettable pageant of white girls masquerading as Native Americans in ever more ridiculous head gear. This is not a film for the ages.

The George Olsen band recorded mainly on the Victor label, but unfortunately I don’t have any of the actual records. Do not despair. You can actually hear my Pop Yoder wail away on the Library of Congress’ online National Jukebox! Here is a 1924 recording of Pop Yoder playing Sax-o-phun with the George Olsen band. You can also view this medley of starlets set to George Olsen’s You’ll Never Get to Heaven With Those Eyes, but there are no pictures of Pop. He is credited, however. God, how I love the Internet.

Pop wrote a loving greeting to Mama Helen on the front of that 1920 George Olsen band photo, but her first husband, my great grandfather Roger H. Adams, didn’t pass away until 1930, and Mama Helen and Pop didn’t marry until 1945 in the Panama Canal Zone.

I guess they must have been friends for a long time, but I don’t know any of that history. I’d love to know more, because it’s hard to guess what, beyond the allure of Mama Helen, led a successful musician to leave the glitter of New York and Hollywood for the relative quiet of the Panama Canal Zone. According to Pop’s obituary in the Canal Record:

“He played in bands led by Paul Whiteman, George Olsen, and Jan Garer [sic] before forming his own band in the 1930’s. He began working for the Panama Canal in 1938 as a Property Inspector in the Accounting Department, and retired in 1957.” (I assume that “Jan Garer” is actually Jan Garber, though Pop is not credited in the wikipedia article about him.)

I haven’t been able to find anything about Pop’s time with the Jan Garber band, or his own band, but I will keep searching. I will also pick the brains of my Mom and my great aunt Katy to see if they know anything about how Pop and Mama Helen came to know each other.

After they left the Canal Zone, Mama Helen and Pop lived in Los Altos, CA, and later in Laguna Hills, CA. I remember visiting them in both of those places as a kid.

From left to right (not including the waitress): Moi, in all my ghastly pre-teen glory, my great grandmother, Helen Adams Yoder, my grandmother, Katherine Adams Lessiack, the one and only Pop Yoder, and my grandfather, Robert Lessiack. Date unknown, but the location is Leisure World in Laguna Hills, CA, and I’m pretty sure the photographer was my mother.

Eventually Mama Helen and Pop relocated to Kerrville, TX, where my grandparents, Bob and Kathi Lessiack, settled after their retirement from the Canal Zone. Pop passed away at the Kerrville VA Medical Center on November 28, 1982, at the age of 87. I remember him fondly, though oddly enough, I didn’t become truly aware of his musical past until after he had died. Isn’t it odd what penetrates the youthful cranium and what doesn’t?

I’ll leave you with a few more photos of Pop, who could really swing.

Pop Yoder, date and photographer unknown. Check out the vintage AAA badge on the grill of his sweet ride. 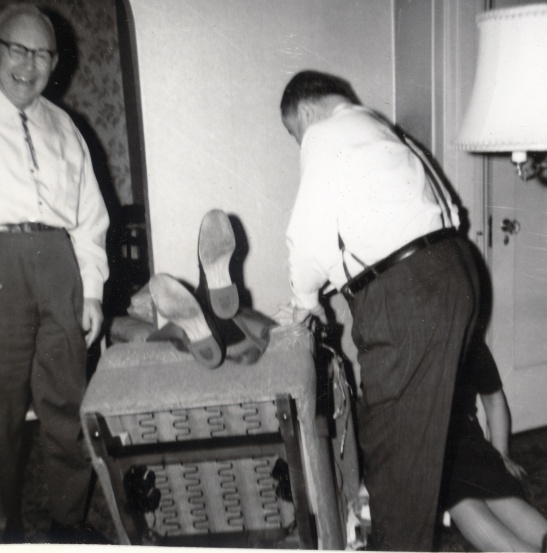 Pop Yoder, cracking up on the left. I have no idea what these clowns are doing. Date and photographer unknown.

See those chairs? They now live at my kitchen table. I love having family furniture and dishes in everyday use in my home, because it makes me feel close to these folks even though they are gone. Pop Yoder is on the left, having lunch with my grandmother Katherine Adams Lessiack, and her mother/his wife, Mama Helen. Date and photographer unknown. 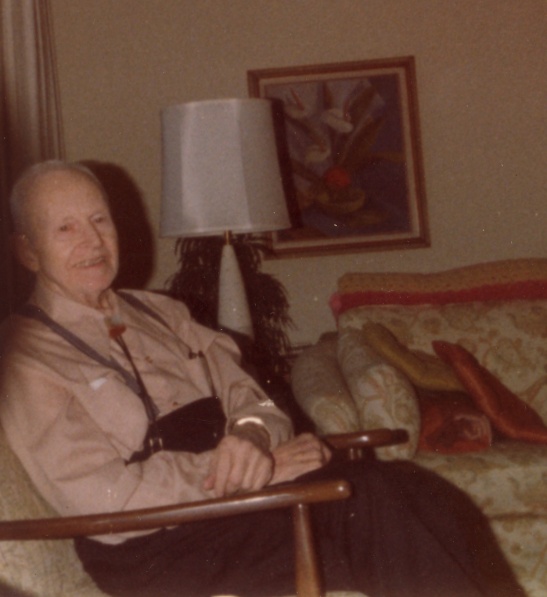 14 comments on “Pop Yoder was a Swinger”