Why Do This, Part Deux

If you haven’t seen Bruce Feiler’s article This Life: The Stories That Bind Us in the New York Times about the importance of family history to the development of children, do yourself a favor and read it. Because I’m a parent before I’m anything else, my kids inform most of what I do in life; it’s encouraging to learn that the time I’m spending learning and writing about family history might have benefits for my girls beyond the obvious.

“The single most important thing you can do for your family may be the simplest of all: develop a strong family narrative. I first heard this idea from Marshall Duke, a colorful psychologist at Emory University[1]. In the mid-1990s, Dr. Duke was asked to help explore myth and ritual in American families.

“There was a lot of research at the time into the dissipation of the family,” he told me at his home in suburban Atlanta. “But we were more interested in what families could do to counteract those forces.”

Around that time, Dr. Duke’s wife, Sara, a psychologist who works with children with learning disabilities, noticed something about her students.

“The ones who know a lot about their families tend to do better when they face challenges,” she said.

Her husband was intrigued, and along with a colleague, Robyn Fivush, set out to test her hypothesis. They developed a measure called the “Do You Know?” scale that asked children to answer 20 questions.

Dr. Duke and Dr. Fivush asked those questions of four dozen families in the summer of 2001, and taped several of their dinner table conversations. They then compared the children’s results to a battery of psychological tests the children had taken, and reached an overwhelming conclusion. The more children knew about their family’s history, the stronger their sense of control over their lives, the higher their self-esteem and the more successfully they believed their families functioned. The “Do You Know?” scale turned out to be the best single predictor of children’s emotional health and happiness.

And then something unexpected happened. Two months later was Sept. 11. As citizens, Dr. Duke and Dr. Fivush were horrified like everyone else, but as psychologists, they knew they had been given a rare opportunity: though the families they studied had not been directly affected by the events, all the children had experienced the same national trauma at the same time. The researchers went back and reassessed the children.

“Once again,” Dr. Duke said, “the ones who knew more about their families proved to be more resilient, meaning they could moderate the effects of stress.”

Why does knowing where your grandmother went to school help a child overcome something as minor as a skinned knee or as major as a terrorist attack?

“The answers have to do with a child’s sense of being part of a larger family,” Dr. Duke said.

Psychologists have found that every family has a unifying narrative, he explained, and those narratives take one of three shapes.
First, the ascending family narrative: “Son, when we came to this country, we had nothing. Our family worked. We opened a store. Your grandfather went to high school. Your father went to college. And now you. …”

Second is the descending narrative: “Sweetheart, we used to have it all. Then we lost everything.”

“The most healthful narrative,” Dr. Duke continued, “is the third one. It’s called the oscillating family narrative: ‘Dear, let me tell you, we’ve had ups and downs in our family. We built a family business. Your grandfather was a pillar of the community. Your mother was on the board of the hospital. But we also had setbacks. You had an uncle who was once arrested. We had a house burn down. Your father lost a job. But no matter what happened, we always stuck together as a family.’ ”

Dr. Duke said that children who have the most self-confidence have what he and Dr. Fivush call a strong “intergenerational self.” They know they belong to something bigger than themselves.”

I saw the power of the family narrative in action in my very own home on the morning of September 11, 2001. As my husband and I, horror-stricken along with the rest of the nation, watched the events unfold on TV, our elder daughter wandered into the room. Seeing the devastation on our faces, she immediately wanted to know what was wrong. How do you explain murderous catastrophe to an 8-year-old? As we flailed around for words to describe the indescribable, she got very quiet, her serious little face lit by the flames raging onscreen.

Then, “Wait. Does Uncle Tom know about this?”

“OK, that’s good.” She nodded, filing away this fact, then off she went.

Uncle Tom is my uncle, my daughters’ great-uncle, who at the time was an active duty four-star General in the US Army. My elder daughter had heard many stories about him, and had attended his most recent change of command ceremony. In my shock and grief, I hadn’t quite gotten around to thinking about his reaction yet, but she jumped right to it. If Uncle Tom knew about this outrage, then Uncle Tom was going to handle it, and that meant that she would be OK. We adults knew it wasn’t that simple, and Uncle Tom would certainly never claim to have September 11 handled, but for her peace of mind that day, it was enough. That’s the power of the family story, a family hero, in the mind of a child: This is awful, but we will get through it.

I was curious about what the actual set of “Do You Know Scale” questions included. Here’s the list, thanks to Dr. Duke’s followup article — read it for information about the intent behind the questions:

I plan to ask my girls these questions over dinner one evening this week. I think they’ll  know the answers to quite a few of them, but maybe not all. I know most, but not all. How about you? 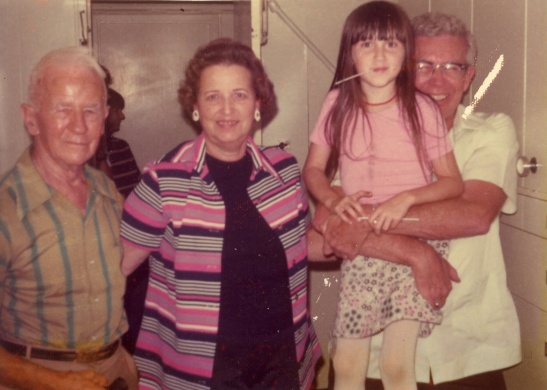 My great-grandfather Leo Lessiack, grandmother Katherine Adams Lessiack, Me, and my grandfather Robert Lessiack. Exact date unknown, but I can safely say it’s the early 1970s, and the photographer is probably my mom.

2 comments on “Why Do This, Part Deux”