What Happened to Hilda?

My great-grandmother Margaret had many pictures of her younger sister, Hilda. They seemed to have a lot of fun together as young women, and Hilda clearly enjoyed posing for photos. She seems like a good-natured sort of person.

Hilda Spielmann. The back of this one says “Hil on the Old Canal Boat.” Date and photographer unknown.

Born in Vienna, Austria in 1895 (or possibly 1896), Hilda was the third child of Herman and Fanny Spielmann. She emigrated to the United States along with my great-grandmother Margaret (age six), Ernst (age four), and their parents on the S.S. Trave on June 17, 1897.  The comings and goings of the family after they arrived are covered here, but I want to focus on Hilda for the moment.

At the time of the 1920 census, Hilda, age 24, worked as a saleswoman in a department store. She must have gotten married sometime before 1920, because the census lists her as “Hilda Morgan”, and reveals that her husband, Harry Morgan, also lived with the family at the time. Harry worked in the laundry industry. I’ve been unable to locate any record of the marriage, but I think I must be going about it wrong. I’ll keep trying — I’m pretty new to genealogical research.

The 1930 and 1940 censuses (cencii?) reveal that Hilda and Harry remained in New Jersey and had three children: Walter, Frank, and Jean Morgan. At the time of the 1930 census, they also had an English boarder by the name of John Cregan.

After this point, Hilda drops off the map. I have no idea what happened to her.

Hilda with two dogs, date and photographer unknown. I don’t know if these dogs belonged to the family, but they appear in several other pictures too. 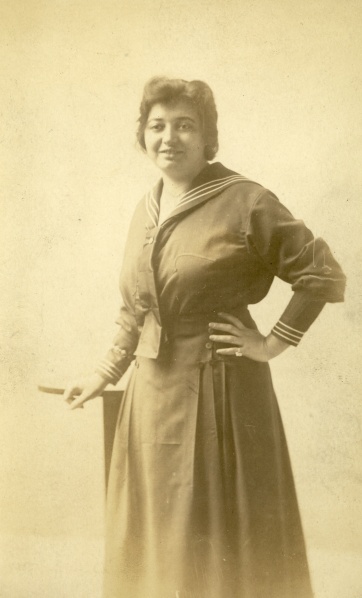 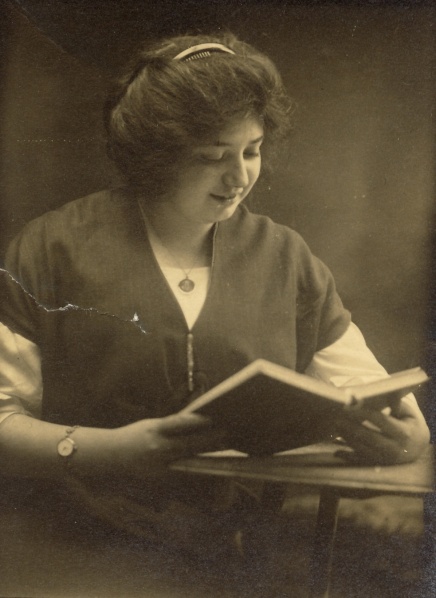 My great-grandmother Margaret passed away in 1953 after a long struggle with Parkinson’s disease. Hilda’s elder son, Walter, appears to have sent a “wreath on an easel” to the funeral (the list of cards provided by The Colonial Home morticians in Teaneck, New Jersey enumerates the floral arrangments: “Walter and Mona – On ribbon ‘Aunt'”), and a Mr. and Mrs. F. H. Morgan signed the guest book, which I assume was Hilda’s younger son, Frank. There’s no sign of Hilda or Harry Morgan in any of the funeral proceedings, nor is Hilda mentioned among the survivors in any of the newspaper obituaries about Margaret that I have. All the other Spielmann children are mentioned, which leads me to believe that Hilda pre-deceased Margaret. I have yet to find any record of Hilda’s death among my great-grandmother’s things, but I’ll keep looking.

In the meantime, raise a glass to my (apparently) merry great-grand-aunt Hilda Spielmann Morgan. If I find any new clues to her life as an adult, I’ll let you know.

The Spielmann sisters, minus Leonor. From left to right: Margaret, Lillian, and Hilda. I think that might be LS‘s dog Taylor at the bottom. Date and photographer unknown

6 comments on “What Happened to Hilda?”